Last week I was in Paris attending POPL 2017 and co-located events such as VMCAI. This was my first time at POPL, prompted by acceptance of work with John Wickerson. Here are some highlights and observations from my own, biased, position as an outsider to the programming languages community.

Due to my prior work with linear programming and polyhedral analysis, the polyhedral talks were particularly interesting to me.

Maréchal presented an approach to condense polyhedral representations through ray tracing, which seems to be of general interest.

While in general, polyhedral methods represent some set as

are parameters, there are various restricted approaches which more efficiently fix

and only allow $b$ as parameters. Seladji presented a technique to try to discover such good “templates” via Principal Component Analysis. I suspect that this is equivalent to an ellipsoidal approximation of the polyhedron in some sense.

Singh, Püschel, and Vechev presented an interesting method to speed up polyhedral abstract domain computations by partitioning, resulting in a much faster tool.

An interesting paper from Jovanović presented a nonlinear integer arithmetic solver which looks genuinely very useful for a broad class of applications.

Lots of work was presented making use of Coq, some of which seemed fairly heroic to me. Of particular interest, given my work on non-negative polynomials for bounding roundoff error, was a Coq tactic from Martin-Dorel and Roux that allows the use of (necessarily approximate) floating-point computation in ways I’ve not seen before, essentially writing a sum-of-squares polynomial

is positive semidefinite for some small

John presented our work on automatically comparing memory models, which seemed to be well received. 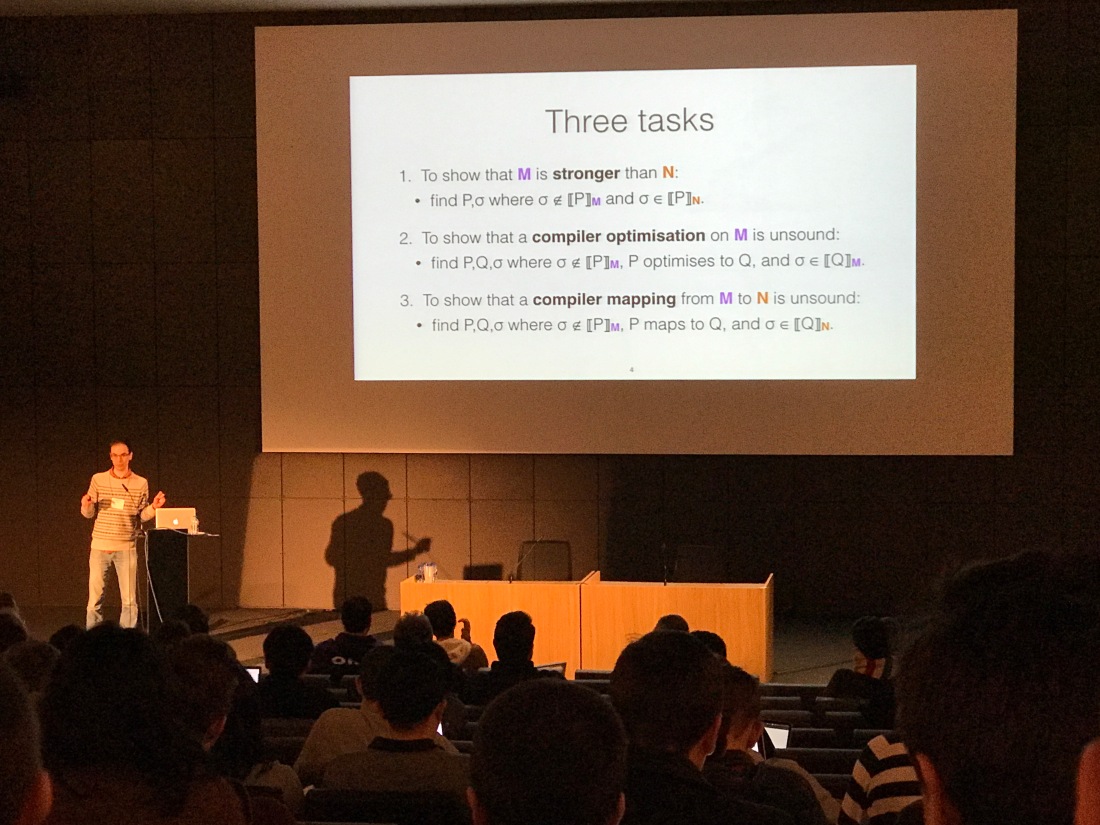 Chiang et al. presented a paper on rigorous floating-point precision tuning. The idea is simple, but elegant: perform error analysis with individual precisions as symbolic variables and then use a global optimization solver to look for a high-performance implementation. Back in 2001, I did a very similar thing but for a very limited class of algorithm (LTI systems) in fixed-point rather than floating-point and using noise power rather than worst-case instantaneous error as the metric of accuracy. However, the general setting (individual precisions, an explicit optimization) are there, and it is great to see this kind of work now appearing in a very different context.

There were a couple of papers [Madhavan et al., Hoffmann et al.] I found particularly interesting on automated cost analysis.

As an outsider, I had the opportunity to ponder some interesting cultural differences from which the various research communities I’m involved with could potentially learn.

Mentoring: One of the co-located workshops was PLMW, the Programming Languages Mentoring Workshop. This had talks ranging from “Time management, family, and quality of life” to “Machine learning and programming languages”. Introductory material is mixed with explicitly nontechnical content valuable to early career researchers. Co-locating with the major conference of the field, I would imagine makes it relatively easy to pull in very high quality speakers.

Reproducibility: POPL, amongst other CS conferences, encourages the submission of artifacts. I am a fan of this process. While it doesn’t quite hit the holy grail of research reproducibility, it takes a definite step in this direction.